Talk Softly and Carry a Carrot, Not a Stick 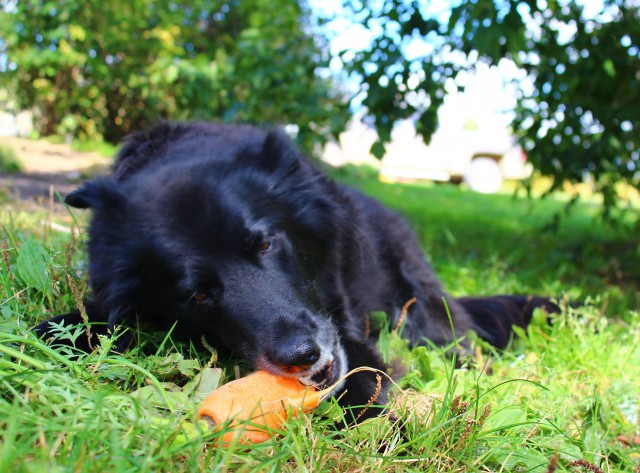 This piece was originally published in a local newspaper in 2006.  I updated it and think it’s relevant to re-run given that the state of New York is currently considering licensing dog trainers.  They’d be the first state to do so.

Dog training is a divided profession. We are not like plumbers, orthodontists or termite exterminators who, if you put six in a room, will pretty much agree on how to do their jobs. Dog training camps are more like Republicans and Democrats, all agreeing that the job needs to be done but wildly differing on how to do it.

The big watershed in dog training is whether or not to include pain and fear as means of motivation. In the last twenty years the pendulum swing has been toward methods that use minimal pain, fear or intimidation – or none at all.

The force-free movement has been partly driven by improved communication from the top. Applied behaviorists, those with advanced degrees in behavior, and veterinary behaviorists, veterinarians who have completed residencies specializing in behavior problems are in greater abundance than in previous decades, and there is much more collaboration between these fields and trainers on the front lines. These two professions are quite unified on the point that the use of physical punishment or confrontation is unnecessary, often detrimental and, importantly, unsafe.  And in 2015 the American Animal Hospital Association came out with detailed behavior management guidelines that unequivocally caution owners to employ only trainers that use force-free methods.

On a more grassroots level, trainers have found more benign and sophisticated tools by boning up on applied behavior science themselves. But dog training is currently an unregulated profession in the US: there are no laws governing practices. Prosecutions under general anti-cruelty statutes are occasionally successful but greatly hampered by the absence of legal standards pertaining specifically to training practices. Provided it’s in the name of training, someone with no formal education or certification can strangle your dog quite literally to death and conceivably get off scot-free.

It’s not a complete wilderness: There is now the Pet Professional Guild, which specifies its member trainers must employ modern, force-free methods.  The Association of Pet Dog Trainers (APDT) Mission Statement, Delta Society and American Humane Association (AHA) trainer guidelines all state that less invasive (i.e. without pain or force) techniques must be competently tried and exhausted before more invasive techniques attempted. Such guidelines are not law, but they’re a start.

The current professional climate is one laden with some remaining fierce debate. There’s an ever-expanding group of trainers that train force-free (ad literature will be some variation on the theme of “dog-friendly” or “pain-free”), trainers that still train primarily with force (ad literature: “no-nonsense” or “common sense”) and trainers that employ liberal use of both force and rewards (ad literature: “balanced” or “eclectic”). From a consumer’s standpoint, the choice in methods is wide. You can hire a professional to train your dog pretty much any way that suits your fancy and it’s all legal in the US.  (More and more European countries are cracking down on the most harmful force tools and methods.)

The force-free movement gains momentum every year and a sure sign of this is that many trainers in the other camps resort to murkier and murkier euphemisms to disguise their more violent practices and retain their market share. Stressed dogs aren’t “shut down,” they’re “calm.” It’s not strangling, it’s “leading.” As a committed devotee of the dog-friendly camp, I am therefore agog at the continued presence in pop culture of “The Dog Whisperer”. This is pretty ferocious stuff by anybody’s standards. The National Geographic Channel even runs a disclaimer banner at the bottom of the screen admonishing people to “not try this at home,” a warning notably absent on home improvement shows or “Nanny 911″. I like to think people don’t get dogs so that they can hurt and scare them, so I’m left wondering whether the cloaking of corporal punishment and hazing in mystical language, promise of instant results, high octane telegenicity of Cesar Millan and lucky connections with Los Angeles celebrity clients are sufficient explanation for the Dog Whisperer phenomenon. I don’t know.  We need psychologists deconstructing what drives people to elect scary, painful practices.

I am willing to bet that, in what’s been termed the “post-factual universe,” we’ll be battling a while longer.