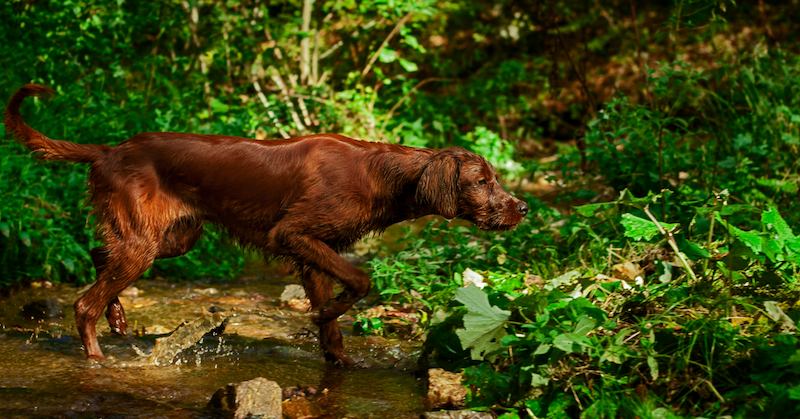 One gorgeous summer morning, I watched from across the pool as a small grey bird fluttered down out of a tree and hovered just a few feet in front of my foster dog, Quinn. Quinn tilted her head to the side and froze for a brief moment before lunging forward and snatching it from the air, issuing a neck-breaking shake, and then tossing it aside—all in one quick movement. She nudged it with her nose once or twice before continuing her sniffari in the pachysandra, as I stood there wondering about the absence of this bird’s self-preservation. I did not wonder about Quinn’s behavior. Quinn is a dog, and dogs are predators. More accurately, they are scavengers and predators.

We tend to forget this about dogs. We easily accept predatory behavior in cats for some reason, marveling at the “good little hunter” that dropped the decapitated mouse at our feet while we washed dishes. We might find it unpalatable, but we rarely classify it as a moral fail, nor worry the cat is deviant and a potential threat to people. We don’t mistakenly assign labels like “aggressive” to our rodent-killing cats. But cats hunt and sometimes kill vermin and birds for the exact same reason our dogs do: preinstalled software that comes with our companion animals from a time when food acquisition skills were necessary for survival. Yet every year, once spring has sprung, my social media newsfeed blows up with posts from dog owners, upset—often angry—at their canine companions’ leisurely killing of all manner of critter. “Thanks a lot, Fido, you jerk! I’m so mad at him right now!” reads the script above the photograph of a broken bodied chipmunk. And I get it. It’s traumatizing to many of us. After all, most of us who share our homes with an animal are animal lovers, and so it saddens and upsets us to see any of them meet an end in our own back yards.

I remember feeling horrified years ago when my Tuck was still young and fast enough to successfully dispatch the squirrels that dared to run our fence line. He’d spot them from the deck and stalk slowly and quietly to the foot of the stairs. He’d flat run to the fence, leap up and slam his body against whatever panel the squirrel had made it to, causing it to lose its footing. He would catch it in his mouth as it fell, shake it dead immediately, and then run a victory lap around the yard with the limp body dangling from his mouth. Tuck was having a gleeful time while I was worrying that somewhere out there was a nest of orphaned squirrel babies.

I also occasionally receive emails from clients and friends after these events, the owners worried this means their dog is dangerous. Could this “aggression” be extrapolated to the dog’s behavior toward people? “The answer is no,” I attempt to normalize, “because this isn’t aggression. It’s a feeding behavior, and it’s as normal as a gull scooping fish from the sea or a fox pouncing on a field mouse.” Yes, they use those teeth, but if we classify this behavior as “assault,” we need to recognize that we, too, assault our breakfast every morning. But assaulting our over-easies doesn’t make us likely to pummel our coworkers or neighbors.

When dogs direct aggressive behavior at people, it is typically in one of these contexts: stranger fear, body handling discomfort, or resource guarding. In all three cases, the objective is to increase distance: “Stay away from me” or “stay away from my super important stuff.” In the case of predation, the goal is to get closer and to actually obtain the stimulus. Put simply, it’s just a biological imperative triggered by prey objects or objects resembling prey.

I recently saw a meme with a picture of a Boxer that read, “Squirrels are just tennis balls thrown by God.” While quite funny, it’s reallythe reverse. Tennis balls are just artificial squirrels thrown by man. It’s because they simulate prey fleeing that dogs chase them.Predation is the reason dogs grab, shake, and often “disembowel” stuffed toys. It’s why tug is so exciting and a preferred activity for many dogs: the tug toy simulates struggling prey. In fact, when played with a set of rules, it’s an excellent outlet for this activity and a fantastic impulse control exercise. If the drive to engage in predation for objects that resemble prey is so great, imagine how triggering a real live prey stimulus must be for our dogs!

Dogs also rehearse feeding behavior in play by chasing, along with all the other skills they need to function in the world, like fleeing (being chased), fighting (roughhousing), and fornicating (mounting). We see this rehearsal in play in early puppyhood and throughout their lives.

Some may ask why dogs feel compelled to hunt if we’re already feeding them plenty. While selection pressures are lifted for food acquisition in domesticated dogs, it hasn’t been very long since dogs were domesticated. From an evolutionary perspective, it’s just been a blink of an eye. Just because the pressure to get it right isn’t there, doesn’t mean it goes away entirely in such short order.

David Mech organized the predatory sequence of wolves as search, stalk, rush/chase, grab/bite, kill, dissect, and eat. It’s safe to assume that one-hundred percent of canids in the natural world that actually live to adulthood get this sequence right, because those that don’t will not live long enough to pass on their genetic flaw of poor hunting skills. In other words, there is a life-or-death pressure to get it right when no one is providing you kibble.

Not so for domesticated dogs, which is why we see only partial versions of predation, or the software gets a bit buggy and is triggered by inanimate objects like squeaky toys. With the selection pressure lifted, they might not complete the entire predation sequence. They may chase, but not grab; chase and grab and shake, but not dissect or eat (like Quinn and Tuck); and so on. But predatory behaviors persist because they once had adaptive significance, and boy is survival ever significant!

So while I empathize with upset owners, I have great sympathy for the dogs that are often punished—even if by verbal berating (and sometimes by painful tools like shock)—merely for being normal dogs. They have no idea why their owners are suddenly so upset with them.

I hope it helps people to step back and view these events for what they really are and find some patience and understanding for their pet dogs. They are not morally deficient for chasing and sometimes killing the critters that happen across our lawns. They aren’t a species with moral capability. We simply chose to co-habitate with an animal that comes with some degree of hunting software. We can give ourselves a break for feeling bummed about it sometimes, but we do well to recognize our natural differences and give them a break, too.