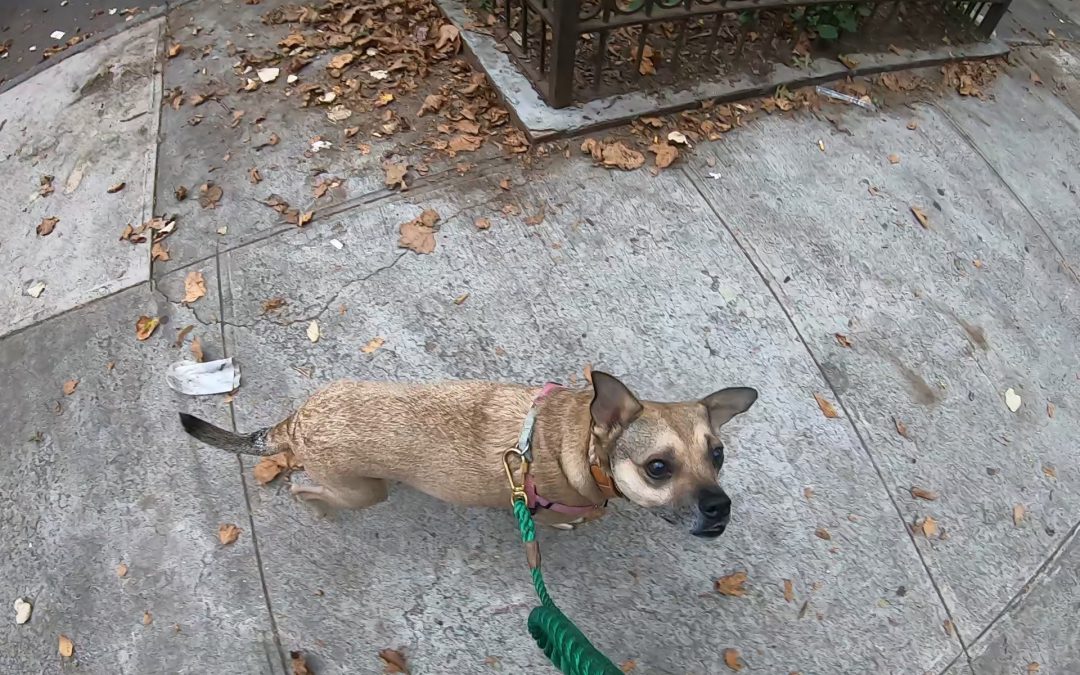 Munchie Browns, an adorable 20 pound terrier mix, lived originally in a rural environment. She was adopted at age four from a local rescue after having tie-back surgery for laryngeal paralysis, as a result of an in-home dog attack from the previous owner’s resident dog. Adopters Tayef and Josh are a married couple, both holding advanced professional degrees, who live in a culturally diverse neighborhood in Brooklyn, New York City. Munchie lives with Bambi the Chihuahua/Miniature Pinscher mix, also a spayed female, who is four years old. There are two resident cats.

Munchie presented with fear of going outside the front of the home in Brooklyn NY. She would ‘pancake’ [lie flat on the ground], refuse to walk or pull to go back inside, freeze, and show whale eye and a tense body. Munchie became uncomfortable just approaching the front door of the home and would avoid the hallway leading to it. However, she was comfortable, with loose, relaxed and happy body language to go potty and explore the backyard, which is quiet and fenced-in with solid walls.  The family had done an excellent job keeping Munchie safe and not pushing her past her comfort level before training began.

Munchie was very pro-social with strangers and friendly and playful towards Bambi, the other resident dog. She was not noise sensitive to outside noises coming through the ground floor windows. She was not fully housebroken, and her fear of being outside added an additional complication for housetraining.

The family had a good understanding of fear, as we had worked together with their other dog, Bambi.  They had no deadline and only wanted Munchie to feel safe and eventually be confident and happy enough to enjoy walks around Brooklyn.

I advised a three-step approach to this case:  management, training and a consultation with a board-certified veterinary behaviorist (VB) that I had an established relationship with. The family immediately set up the consultation with the VB, and behavioral medication was initiated. The process of finding the right medication was trying for the clients: they went through various medication trials due to ineffectiveness or negative side effects.  Munchie was originally started on Lorazepam 2mg. Clonazepam 4mg was added as the Lorazepam wasn’t having a noticeable effect. She had negative side effects from the Clonazepam so it was discontinued and, instead, Gabapentin 300mg/3 times a day was added. This combination had a positive effect, with no unwanted side effects.

It took about eight weeks to get this medication combination, and it was a frustrating and difficult time for the family.  My counseling therefore required a healthy amount of normalizing, encouragement and support via phone calls, email and text messages.  I assured them many clients don’t find the medication that works on the first time, that it often takes some trial and error, that they should trust the VB and that there are a lot of medications to try.  This support helped them realize the process with Munchie wasn’t anything unusual and gave them hope that behavioral medication could still help.

I also began training a Touch cue and Find It, both as ways to get Munchie moving on her own through spaces and as a way to get her from point A to B without using any physical pressure to move her. Both plans were started inside the home, in a low distraction environment and then transitioned to the backyard, where she was comfortable.

Once Munchie was completely comfortable doing both of these behaviors inside and in the backyard, we gradually began working these behaviors in the hallway leading to the front door and then working with the front door open. Then we worked on them in the front courtyard, which has a wrought iron fence, and is not as secure as the backyard.  When transitioning to front door/yard work, I advised the clients to work at quiet, low-traffic times.  Eventually we added in a long line to give Munchie 30 feet of distance to do Find It in the courtyard and then eventually out onto the sidewalk before moving to actual leash walks. We spent almost two months working on her comfort level in the front courtyard, feeding her from her slow feeder bowl, “people watching,” and working on Find It and Touch.  We spent several weeks working on sidewalk exercises with her on the long line, counterconditioning Munchie to passing cars and other city noises.  Munchie always had the option to retreat into the home if she wanted to and was never forced outside.

From a management perspective, I advised never forcing Munchie to do anything she showed discomfort with, preventing exposure to known triggers and carrying her or using a Sherpa bag to transport her to the car for vet visits if needed.

Bumps in the Road 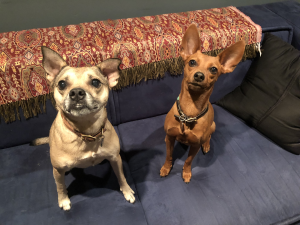 Munchie continued to have housetraining accidents despite a strict housetraining protocol.  We spent some time ruling out whether it was housetraining, side effects from meds, anxiety or something else.  She was diagnosed with incontinence and then put on Prion, which helped for a while. However, several months later, after successful housetraining, the family was finding urine accidents again.  After some sleuth work, a vet check, and reviewing wifi camera footage, we determined it was one of the cats urinating on the dog bed. The housetraining issues didn’t end there, however, as about a month after helping the family resolve the cat urination issue, Munchie did begin to have urinary accidents again. This time, she was diagnosed with recurring UTIs and crystals in her urine, unrelated to the previously treated incontinence.  She is now on a special diet and her urine Ph is monitored at home with dip sticks.  Determining the cause of, and resolving, all the urine accidents required extensive checking in with the clients for compliance with the training plans and execution of training protocols, and follow-ups with Munchie’s VB and regular vet team to figure out which components were behavioral versus medical in origin. However, we continued with the standard training plans I had previously outlined.

After six months of hard work and their commitment to training, medication and management, and despite numerous medical bumps in the road, Munchie took her first leash walk around the block in Brooklyn NY.  It took an additional month for Munchie to potty on a walk, and that was a momentous day!

Today, she eagerly goes on walks, even with a dog walker. She sniffs, urinates and defecates, goes on adventures in the woods during hikes upstate, jumps into the car happily on a busy street and enjoys weekends in the park during the nice weather.  I continue to work with the family on other skills, including having done several day training sessions for nail care and vet stationing.  Tayef and Josh’s commitment to providing a happy, safe life through training, enrichment and anything else they need is stellar.

Huge day for Munchie today with me. She pottied on her walk with me. She’s pottied for her mom a couple of times but this is great progress that this fearful dog is becoming more confident outside. And look at all those lovely check-ins with me. Great job, Munchie!

Posted by Rescued By Training on Tuesday, October 15, 2019

Academy for Dog Trainers graduate Kate LaSala services clients in the metro NYC area and remote clients worldwide, specializing in fear and aggression cases.  More information can be found via her website, Facebook or Instagram.