Why We Need to Modify the Humane Hierarchy 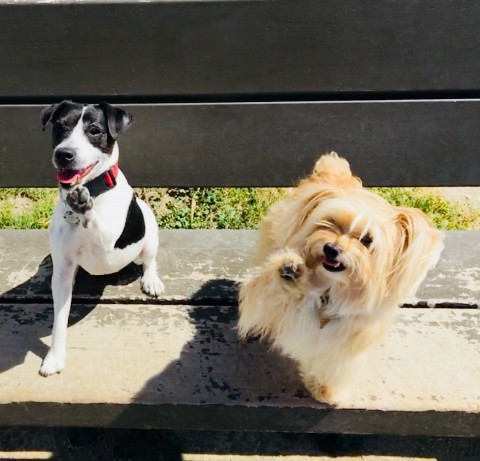 Why we need to modify the Humane Hierarchy

His post is part of Companion Animal Psychology’s Train For Rewards Blog Party 2018.

I love the idea of the Humane Hierarchy. We’ve needed a simple-to-understand graphic which gives people a visual representation of what training and behavior modification techniques are more humane and which ones should be used with extreme caution or never. When the current version of the Humane Hierarchy (“HH”) came out, many dog training professionals heralded it and used it in their marketing materials to make it clearer to the public how they train dogs. And the public deserves that sort of transparency.

So, what went wrong?

Despite the best intentions of the creators, I’ve seen the HH used to justify the use of some pretty awful treatment of dogs because on it, R- is on the same level as P-. People with lesser information (or, if I’m thinking more skeptically, people who are looking for a justification to use force) say, “oh, it’s okay, this method is fine – Susan Friedman said so herself.” Now, having spoken with Susan about this, I know she’d disagree with those people. Here’s why.

While I’m absolutely dedicated to not using any Negative Reinforcement to train dogs, I think we can agree that some varieties of R- are worse than others. At the risk of sounding like I’m endorsing R- methods, I’d suggest that crowding and leaning over your average comfortable, well-adjusted, reasonably-fearless dogs to teach them to back up might be effective and harmless. Sure, they’d back up to seek relief from our crowding, but they may not find it terribly scary or painful. I’d not recommend this approach and I wouldn’t intentionally use it myself – but I wouldn’t be worried about the welfare of a dog being taught that way by a well-meaning dog owner.

On the other hand, if someone is pressing a button on a shock collar until a dog recalls, I AM going to worry about the welfare of that dog. And that is a common application of Negative Reinforcement. Likewise, ear pinching to teach retrieve, collar tightening, and pinning a dog to the ground are also common examples of Negative Reinforcement that I suspect the majority of people who the HH was intended for wouldn’t be using.

But the success of the Humane Hierarchy means that it is now reaching people who are new to dog training, who don’t understand quadrants very well, or are balanced trainers who are more comfortable using force to train companion animals. And the Humane Hierarchy provides them the justification they need to continue using pain, fear, and intimidation. How? Because, again, on the Humane Hierarchy, R- is on the same level ethically as P-.

Now, might Negative Punishment be unpleasant for the dog? Sure. As a matter of fact, for it to work, it almost certainly has to be unpleasant. Most dog trainers point to timeouts as the standard P- move. That can be frustrating to dogs. The issue is the same with extinction, which is on the same level as P- and R- on the current HH. It can cause frustration, sometimes in a big way. But here is the thing: Frustration does not equal pain or fear in my book.

The Humane Hierarchy, as written, makes it as easy for a trainer to claim it is OK to shock a dog (at any level of shock, by the way) until they recall as it is to time out a dog for 30 seconds for jumping on a guest.  Or to close your hand in a leave it exercise.

And that’s absolutely not okay.

The way I see it, we have two options.

First, we could list a wide variety of R- and P- techniques and rank them in terms of invasiveness, pain, fear-inducing, etc. We could color code those we feel are acceptable, caution people about some with yellow, and mark the “really – NEVER use this approach” with red. This takes away from the simplicity of the HH (and that would be a real loss). But the simplicity is causing real harm to dogs now. We have to change that.

Our second option is to completely separate R- from P-. This is the way I’d go. Now, there are arguments against this. Some would say that SOME P- approaches are worse than SOME R- options (so they might like that first ranking idea more than this one). Maybe well-educated professionals are in a better position to do their own rankings and make appropriate choices. But the average pet owner and many self-taught dog trainers aren’t the same – a real understanding of ABA is required for this sort of decision making.

Glenn Pierce of PowerPuppy Dog Training has created an alternative hierarchy which gets us closer to something safe. His version looks like this: I’d add in extinction to this like Susan’s version has it – or at least on the same level as Negative Punishment (they are similar – frustrating, but not painful or scary).

And isn’t that the whole purpose of the Humane Hierarchy to begin with?

I’d love to think so. I feel it is all our jobs to educate better and to educate more people. I recently attended a wonderful three-day training with Susan Friedman with about 150 attendees. It’s going to take a lot of those sessions to counter the spread of “oh, P- and R- are equally humane in any form” that’s being bandied about in Facebook groups containing more than 20,000 members. The admins of such groups can only do so much when someone says, “but the Humane Hierarchy which is supported by experts, says…” In reality, we’ll never get to all those people.

Before publishing this, I’ve already asked a number of people to review it. Now, I’m publishing it here (with sincere thanks to The Academy for Dog Trainers for allowing me to do so). If there’s sufficient support, perhaps a modified version of the hierarchy can become the standard for dog trainers. I look forward to your input.