Overcoming Fear of Dog-Dog Play: An Interview With Suzanne Bryner 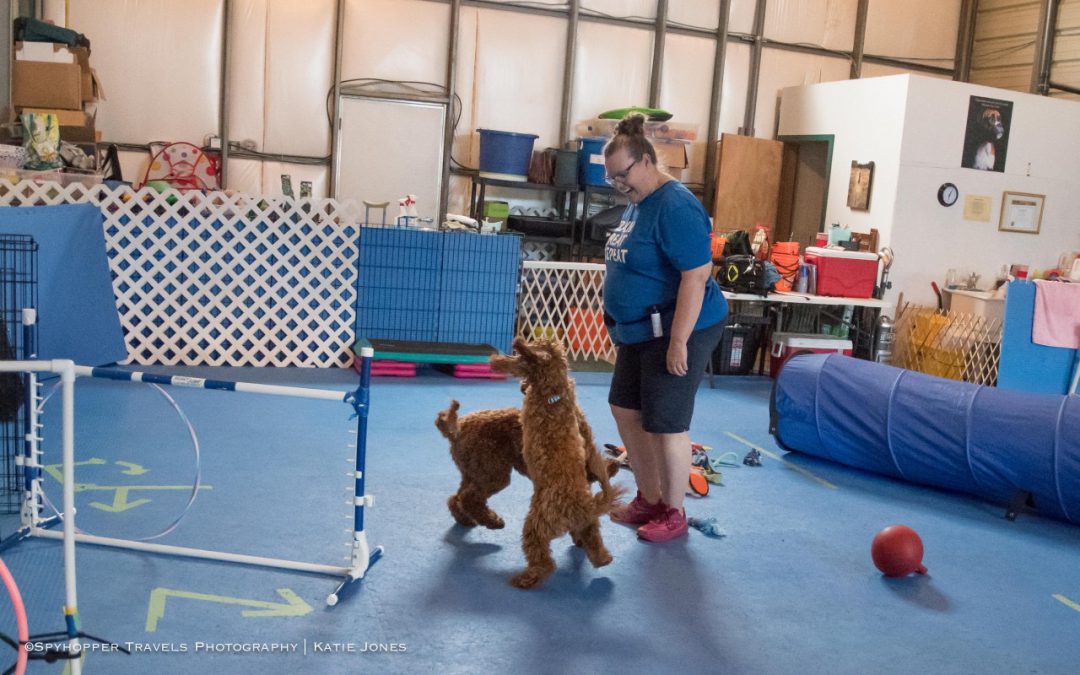 Many dogs enjoy dog-dog play. It’s enriching, it’s welfare-increasing, and it’s good exercise for dogs. But although many dogs enjoy it, the same can’t always be said for the people in the room. Standard, safe, and species-typical pet dog play can appear (to the human’s gaze, at least) alarming and aggressive, and it’s not unusual for dog owners and even dog trainers to find it off-putting or worrisome. At The Academy, our graduates learn to identify the constituents of normal dog play and how to help dogs with play-style issues learn new skills, which renews their invitation to the dog park. But just learning what normal play looks like doesn’t necessarily help us humans, who might find the body-slamming, biting, boxing, and chasing of normal play to be scary or discomfiting 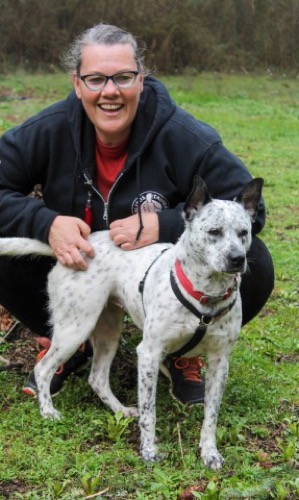 Our graduates who want to work with dog-dog issues but who also find normal play worrisome are a bit boxed in by their own (entirely normal and human) worries. We counsel two paths forward here: these graduates can simply avoid accepting clients with dog-dog issues and instead refer them to trainers who are more comfortable. However, we also support and encourage our graduates to roll up their sleeves, take a deep breath, and try to habituate to the roly-poly raucous nature of good dog play, if they so desire. We want more competent trainers helping dogs experience normal sociability with other members of their own species. And we know, from experience, that trainers can learn to have a cool head in the face of dog play: we help dogs overcome fears every day, so we’re already primed in the process of learning.

Academy graduate Suzanne Bryner of Lucky Fido Behavior Consultation and Training on San Juan Island, Washington runs a play group for large and boisterous dogs who need a bit of human intervention to bring their play styles more in keeping with canine norms. She calls this group the “Bruisers”, and reports with regularity that dogs who were kicked out of the dog park for transgressions like humping, scrapping, or other inappropriate behaviours are now dog park professionals: perfect, playful pooches. Suzanne was not always comfortable with raucous dog play, though. She shouldered the burden of a lot of personal work to overcome some initial misgivings, and I recently spoke with her about why, and how, she managed to habituate to rough dog play and scraps enough to offer this wonderful service to her clients. This interview has been edited for clarity and brevity.

KB: Can you describe how you used to feel when you saw dogs playing athletically or roughly?

SB: Honestly, I’m not sure that I saw a lot of that. Where I grew up, everyone had dogs but they were back yard dogs. When I got into dogs about ten years ago, I ended up pulling my own dog out of play really early on advice of another trainer. I hadn’t seen a lot of really rough dog play.

I’d seen skirmishes, and when I look back now, they were mild. But to the people I was listening to at the time, they were a big deal. I was doing a lot of training classes and agility with my dog Foxxy. We did dog classes every day, she did great around other dogs, but we’d often walk at the ‘Gravel Pit’, [a local off-leash dog walk], with lots of off-leash dogs. She had a couple of fights. A dog trainer advised me that she shouldn’t be around dogs at all! I mean, it was scary that she got into fights. And scary, for me, that people thought it was a bad sign, that she was “aggressive”.

KB: When did you first have an inkling that you wanted to change your own perceptions?

SB: I mean, at the Academy, you’re getting it from the very beginning–about what dogs are. When I was about half-way through the Academy, I knew I wasn’t ready for clients or certain kinds of classes, but I did start a puppy class. I allowed free play in my puppy class. I loved it and the people loved it. It felt like a really important part of their development–the people and the puppies.

Then, the Academy did those Habituate Webinars. [The Academy offers an on-going webinar series to help our students and graduates habituate to dog-dog cases, using video. The videos go from gentle play to boisterous play to snarking or squabbling dogs, and participants are asked to rate their response level from one or calm to ten, or really upset, after each video segment.] It’s so memorable to me–one video with a fighting dog and a person on a bike in the woods. We had to scale our responses, and I was at the extreme end. Like a ten. Other webinar attendees were not nearly as worried. I looked at that and thought “clearly this is a place where I need to clean up. I can’t help dogs with this strong of a gut reaction.” So that was the moment that I really took it by the reins.

KB: What did you find helpful in your journey to become comfortable around boisterous dog play?

SB: Immersion in the culture of the Academy and the Habituate webinars. Even just having the opportunity to change my mind was very important. Early on when I decided to start running a play group, and I went and spent two or three days watching Academy graduate Kelly Lee run play sessions. Just that watching taught me so much. It made me feel brave enough to start doing this, so a big shout-out to her, she made a huge difference to me.

KB: Can you tell us a bit about your Bruisers Play Group? 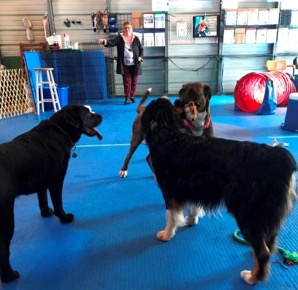 SB: My Bruisers Play Group grew out of my regular play group. I had a few dogs coming in who were large and intense. Their people had been shamed at the dog park for rough play, or some were dogs who were a bit off, play-wise. I now run it once a week. I have other adult play groups, but Bruisers is once a week. I was not sure if it would be a go, but I just put them together [at this point, Suzanne laughs, remembering her own audacity.] I started to work with them in the group, and bringing their owners in too. No-one was sitting down. Everyone was in there, interrupting, moving dogs along, participating. I enlist the dog parents actively. And it gives them amazing skills. They are now amazingly skilled handlers because of that. And they’re proud! They’re proud of themselves and their dogs.

It’s open to anyone, but it’s not open to dogs who have harmed dogs. If dogs have caused injuries needing stitches or medical care, they’re not invited unless they’re muzzled. And although the public is invited, they must fill out forms. Almost every dog is big, or felt shamed at the dog park and didn’t feel like they could go back, or they have a breed issue. Or they’re scared to let their dogs play, but they all want it. A lot of them are dog park attendees who were run out of town. Before they get to the Bruisers Play Group, many of them had play that tended to be a bit off, and they tended to scrap.

Some really common problems include dogs who hump, dogs who neck bite incessantly in play, dogs that tend to scuffle–not full-on fights, but a lot of snarky interactions. Dogs that bang into each other, or pin other dogs. It can look scary, a bit predatory even.

Some days, I can have two dogs, other days I can have six or seven dogs. Once you’re in that group, you’re welcome whenever—it’s drop-in. I find I’m getting more and more new dogs. When a new dog comes in, I fence about a third of the training area off. The new dog goes into the smaller area. I want to bleed off that first ‘coming in hot’ thing that dogs do. This way, all the dogs can interact through the fence. I’m looking for some sign that they want to be there. Looking for a play bow, it doesn’t matter who, from the new dog or the other dogs. Dogs come in one at a time anyways, but new dogs stay in the fenced off third longer, until they are welcomed. Then I just open the gate.

I still feel terrified every single time. But I’m the one in the room who has to not be that person. I always admit how I feel, and we’re fully prepared with everything needed to break up a squabble. We use a recall out of play if we think they’re about to tip over into a scrap. At one point, I had a discussion with all the parents about the use of citronella spray. I’ve evolved. Previously, when dogs fought, we used spray right away. Now, when a fight starts, we count to three. If they’re still fighting, we’ll try to call them apart or separate using a safe pull-apart. If that doesn’t work, we’ll use the spray as a last resort. We haven’t had a lot of fights since we started doing that. Part of the reason for the decrease in fights is that the Bruisers are so solid. We’re changing their play. The parents are so proud of their dogs. 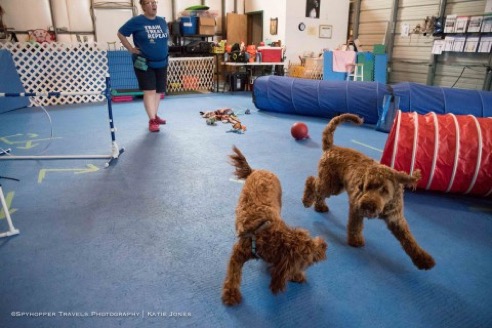 SB: I was always on edge before, around loose dogs. I was always on edge, because my dog was from Mexico. I would think “she might be a bad dog, as a street dog”. Now I just swim in feel-good hormones. I can go into a play group feeling tired, but I always leave there so full of energy; happy, and confident. I feel excited and strong. And I feel so excited for the people who attend.

I spend a lot of time modifying and normalizing dog play. I tell them “your dog’s play is fine, but dog park people might be nervous or have had a bad experience. There’s nothing we can do about that. But your dog is fine. We can help their problem play type through interruption and redirect with a new behaviour.” Just that small thing changes everything! It’s not a big trainer-y magic thing.

Suzanne now gives her own students this opportunity to habituate and even enjoy dog-dog play through graduated video exposure, based on her own success.

I have students and play group attendees and clients who want to do that. They want to watch dog play. I send them videos to look at and watch, because they want a tougher skin so they can advocate for their dogs. Advocating for their dogs–that’s what my Bruisers Play Group, actually all my play groups, is all about. The people who come to Bruisers are forever changed. They advocate for dogs, and in particular for their dogs. And they let their dogs be dogs. Empowering the public to be out there with their dogs and saying “hey it’s ok”. Or leaving, when they’re feeling vilified and knowing there is nothing wrong with their dogs.

The Bruisers taught me a lot. They continue to teach me a lot. And they led me to my passion, dog-dog play!

Thanks so much to Suzanne Bryner for sharing her experiences with her Bruisers Play Group. This blog is a part of the 2019 Train for Rewards blog party, with Companion Animal Psychology.