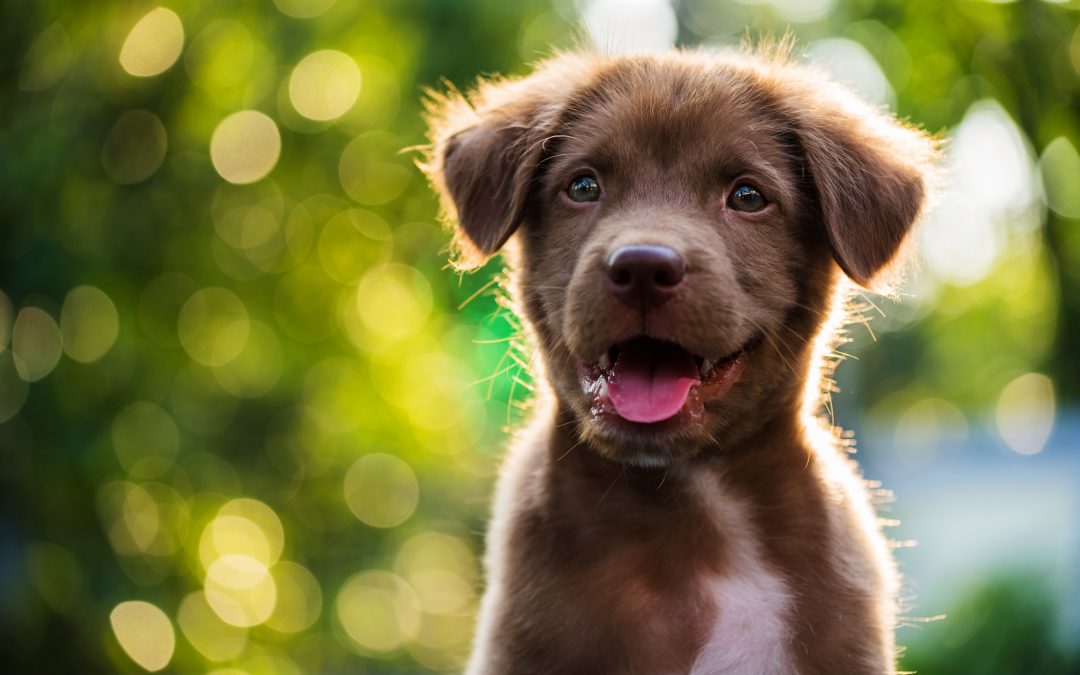 Dogs have extremely strong jaws and powerful bites. Even the smallest of dogs can deliver an injurious bite as an adult, and big dogs can inflict even greater damage. Despite this physical ability, most dog bites do not result in terrible injury. In fact, many leave only a small scratch or a few bruises.

Like wolves, with whom dogs share a recent ancestor, dogs use their jaws to both hunt for prey and settle social disputes. Because their jaws are dual-purpose, it is vitally important that dogs and wolves do not use the full (prey-killing) force of their bite during social interactions such as play and fighting. Instead, they use what ethologists call “ritualized aggression”. Ritualized aggression includes threats, body postures and inhibited bites.

Large predators… which live permanently in a society as wolves or lions do, must possess reliable and permanently effective inhibition mechanisms. These must be sufficiently self-reliant to be independent of the changing moods of the individual.

Acquired bite inhibition (ABI) refers to the ability of a dog to bite with inhibited force. Dog trainers care deeply about a dog’s ABI because it has important prognostic implications. A dog who bites a neighborhood kid with an inhibited bite is the subject of a very different conversation than a dog who bites the neighborhood kid with maiming force. In the first case, the dog will likely undergo a standard behavior modification program. In the much rarer second case, the dog may well end up euthanized, depending on the severity of the bite and other factors. Luckily, most dogs have good—or at least good enough—ABI. However, dog trainers and veterinarians do occasionally get a call about a dog with poor ABI, and it is always heartbreaking.

Unfortunately, research on acquired bite inhibition is scant. Like all behavior, it seems reasonable to assume it has genetic and environmental determinants and influences. Many experts and practitioners believe that dogs learn, or refine, their ABI through play biting as puppies.

Puppies play by tumbling around and biting one another. Suddenly one of them gets a grip on another’s ear. It bites hard and the poor brother or sister howls in pain. The other puppy succeeds in getting its teeth in the tender skin of its sibling’s belly. Much whining and yelling follow. They stand still for a short while, then let go.

Next time they act slightly differently. One will grasp the other’s ear only until the puppy begins making noise. It will react to the sibling’s vocal distress, which works as a mechanism to inhibit or control aggressive behaviour. Previous experiences showed the puppy it is better to let go at the first signs of vocal distress, or its belly will hurt. This is learning by trial and error.

Many dog trainers offer puppy classes where puppies are allowed to play freely…with caveats. The most important caveat is that all canine parties consent. Playing puppies are regularly separated to allow them to re-enter play, or not, at their will. Puppies exhibiting inappropriate play are punished by their play-mates if their infractions are minor. If they are more serious, thoughtful practitioners will institute time-outs. Much of the time, trainers see inappropriate, scrappy puppies trend to become socially normal. This allows these reformed scrappers to continue to play as puppies, which in turn allows them to refine their ABI. (And this is completely aside from the potentially enormous benefits of the puppy being able to engage in dog play with the playmates of their own choosing, an activity that is so pleasurable, enriching, and basic to a social species that it is sometimes used as a shorthand welfare indicator.)

Many dog trainers also coach their puppy class students to allow their puppies to mouth them. At first, all mouthing is allowed, except for the very hardest of bites. As the puppy ages, progressively softer bites earn the puppy a time-out. This protocol allows puppies to gradually lessen the force of their bite through information feedback—and indeed, a gradual reduction of bite pressure is what puppy class instructors see, in thousands upon thousands of puppies. This protocol and its heavy helping of information feedback to the puppy is believed to have superior ABI-refining benefits over other protocols: those where every bite is punished from the get-go; those where every bite is redirected without consequence; or those where non-biting behavior is instead constantly reinforced. It does appear that once puppies are past the socialization window, ABI is not modifiable, based on the lack of any known successful attempt to modify ABI in adult dogs.

Although there is not a body of research about how ABI is gained or refined, several case studies of socialization-age puppies with known poor ABI being turned around with a time-out protocol are both compelling and typical. “Maui was an 8 week-old female mixed breed (possibly Labrador retriever cross), who was found as a stray and brought to a shelter. Her poor ABI was discovered during her intake at the rescue organization. She bit 3 littermates and 3 volunteers, resulting in a puncture wound to a littermate and bloody scratches on the other 2 puppies and the volunteers. In the first few days of fostering her, she bit the palm of my hand hard enough to leave a 1 inch cut that was as deep as half of her tooth.

I used three training protocols on Maui. Everyone who had contact with her was instructed to follow these protocols. Firstly, I yelped and briefly moved away from her to end play when she delivered a hard play bite. In this case, the yelping and ending of play did not result in softer bites. On day two, I decided to increase the magnitude of the time-outs. The revised protocol was to place Maui in an automatic timeout for any hard bites. When she bit hard, a cue was issued and she was placed in timeout for 30 seconds to 1 minute. This did help improve the hard biting. It reduced the number of incidents and some gentle play biting began. I allowed, and even encouraged, the gentle biting. When she was 10 weeks old, she was still occasionally play biting too hard, and I changed the protocol once again. The magnitude of her timeouts increased, and she was placed in timeout for 30 minutes for any hard bites.

At the age of eight weeks, she was introduced to playful adult dogs that are known to be gentle with puppies. These dogs informed her when the biting was too hard in a gentle, non-scary manner. She was not introduced to other puppies until she was 4 months old, and even then, only to older puppies between the ages of 4 months and 6 months.

When she was 5 months old, she had a normal scuffle with a 6-month-old playmate. The play had become too rough and a fight broke out. I broke up the fight and examined the other dog and found zero injuries—in other words, she had a real-life test of her refined ABI, and it had changed from injurious to non-injurious.

Maui was adopted when she was 13 weeks old and was no longer play biting hard. She is currently one year old. She has since been introduced to puppies as young as 8 weeks. She has a very gentle play bite and has never made a puppy yelp due to her biting.”

“A local farmer surrendered a litter of nine 6-week-old mixed breed puppies to a rescue after their mother died. These were timid little pups, exposed to very little prior to surrender, so they went to a seasoned puppy foster. She reached out to me shortly after their arrival, concerned about how hard they were mouthing. All were issuing painful bites, with three of them, in particular, drawing blood in every instance.

Recognizing that the socialization window would be starting to close in the next few weeks, I decided to address both the fearfulness and poor ABI immediately using our trained volunteers. A plea went out to the volunteers that evening, and an interactive schedule was made to ensure a steady flow of visitors on continuous rotation through the foster’s home. That’s the great thing about a rescue full of volunteers—strangers are a precious resource in cases like this, and this is the fun part for volunteers. People arrived in shifts, were greeted at the door with a container of freshly boiled chicken, and the puppies were treated to an abundant helping of gentle body handling paired with generous portions of chicken and ‘happy talk’ for the next four days.

All volunteers were given the ABI protocol ahead of time, and the foster coached them to use time-outs for all hard bites to humans (puppy bites hard—“too bad!”—placed in pen for 1 minute—let out of pen to try again). This protocol successfully modified all the puppies’ ABI, although it did take a few days and a large number of volunteers. We had roughly a dozen new people a day pitching in. By the third day, all puppies were mouthing softly and all were decidedly pro-social to strangers, wiggling and snuggling up to every new person who entered. Their ABI progress allowed us to bring in kids of different ages to extend their socialization even more. Once we had reached this point, we scaled it back a bit to a couple of people once a day with bigger socials on weekends; however, that intensive effort over those first few days was considered imperative.

The puppies progressed normally, and all were adopted into wonderful homes, some of them multi-dog homes. All exhibit normal, non-injurious play with their new siblings. One is a therapy dog who visits patients at a nursing home every week.” Adult dogs who bite with maiming force are a danger to the public, their owners, and themselves, as society has very low tolerance of such dogs. For this reason, the Academy for Dog Trainers endorses puppy programs which include exercises to carefully train puppies to have good ABI when they are adult dogs even in the absence of good research. There are two reasons for this.

It may be that our ABI protocols are simply for naught. However, the two types of exercises in use to refine ABI—allowing a social species to have normal, appropriate play access to conspecifics as young animals, and using well-established, aversives-free, and humane protocols to gradually, rather than suddenly, decrease mouthing—are not problematic, so the drawbacks are minor: time wasted, and arms mouthed.

Some trainers recommend avoiding attempts to refine ABI or even avoiding structured puppy interactions altogether. However, it is a fallacy to claim that there are no risks to these approaches. Anything we can do to improve ABI may, without exaggeration, save life and limb. The likely case is that these exercises do function as we intend, as is suggested by the case studies above and many others. Practitioners who choose to prevent puppies from having an opportunity to improve ABI are proselytizing from a dangerous soapbox indeed.