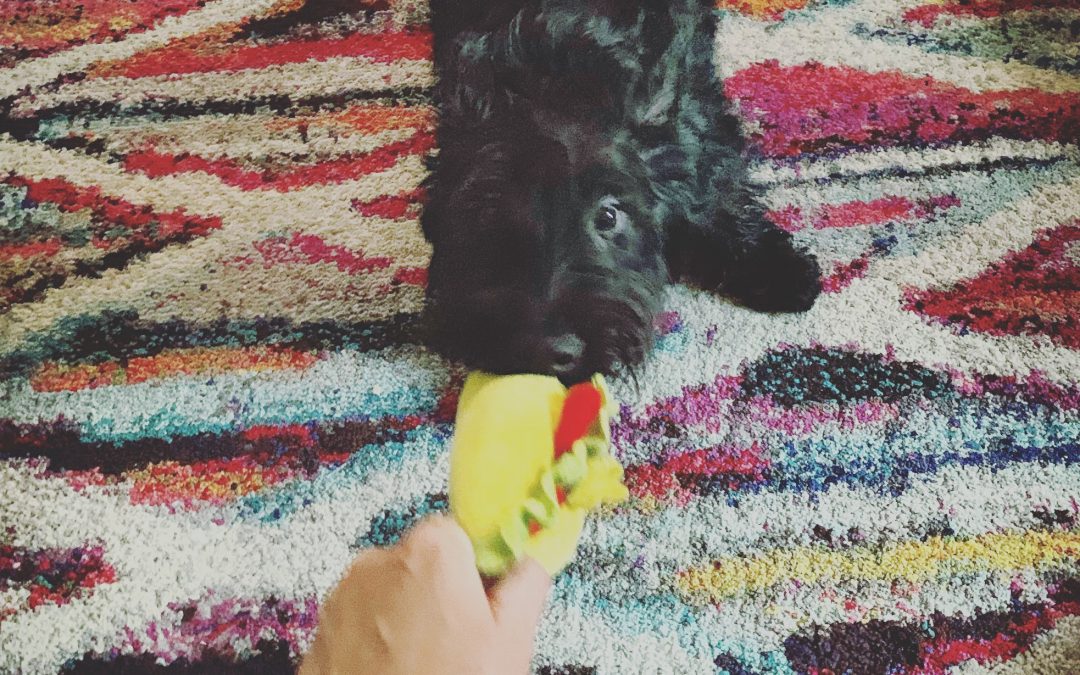 The Academy for Dog Trainers is pleased to announce a new occasional series, Academy Graduate Case Studies. The first case study is a particularly interesting and relevant illustration of the quality counselling and dog behavior modification that clients who hire Academy trainers receive. 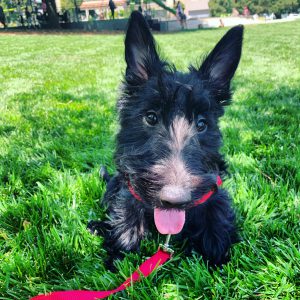 Monique got in touch with Academy graduate Torie Silletto for help with Islay’s leash reactivity to other dogs. When she saw other dogs, Islay would bark, growl, and lunge. It was so intense and frustrating for Monique that when Islay saw another dog, Monique would end the walk. Monique worried about Islay being possibly fearful or aggressive to other dogs. Islay was also reactive to a variety of other city stimuli: skateboards, scooters, sounds, kids, uniforms, garbage cans, all manner of weird stuff. For all of these stimuli, Islay would bark, growl, lunge, or even chase. Monique told Torie that Islay “whines and cries for no reason at all on streets we’ve been on 100 times.”

In addition to the on-leash problems, Monique wanted Torie’s help with Islay’s overall unruliness and inability to settle: she was very easily “aroused.” Monique felt she couldn’t take her dog anywhere. When Monique tried to take her out with friends—to Napa wineries, or visiting parents, cafes or walks in the cemetery—the outings were fun for no one. Islay would ‘lose her mind’ the second she exited the car. Monique rated her frustration with Islay’s behavior a 4 out of 5.

For dog reactivity, Torie chose the Leave-it plan, which is an operant counterconditioning/differential reinforcement plan, along with other ‘impulse control’ behaviors such as stays and wait. Torie also recommended that Monique increase Islay’s access to dog play, both as a welfare-increasing measure and to saturate her for the leave-it plan. Finally, Torie coached a “Turn and Go” for times when Islay was on leash outside of a training context, and other relevant management during Islay’s training. 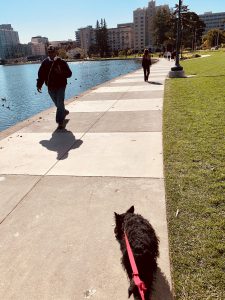 For Islay’s reactivity to sights and sounds of the city, Torie chose solo classical conditioning (i.e. with no DS) to ‘weird stuff’ on walks, with treats tossed to the ground. In addition, Torie coached a more formal DS/CC protocol with a CD of city noise sounds. Torie also asked Monique to take field trips to areas with different city scenery to help with habituation, and had Monique use the ‘Leave-it’ training for use with moving objects and to prevent jumping up on people.

For Islay’s unruliness/excitement, Torie decided that heavy exercise and enrichment was the obvious choice. She demo’d fetch and the rules of tug games to Monique. To increase enrichment, she had Monique swap Islay’s food bowl for puzzle toys. Torie also coached Monique that before attempting any sort of outing, she should tire Islay out thoroughly. Islay was living a relatively sedentary lifestyle with frequent naps, and her exercise needs were simply not being met. Her behavior on walks was too overwhelming for Monique, and as a result she dreaded even taking her dog outside. Understandably, all Monique wanted was for Islay to calm down. Monique was attempting to create calm behavior by encouraging naps and a low-key lifestyle. Although this is a common suggestion, clearly it was accomplishing the opposite of what the client wanted and was indeed the opposite of what the dog needed.

Whenever Islay goes to sleep or has an idle period, her batteries become full. She will then expend this energy at her first opportunity like an uncorked volcano. Providing ample mental stimulation and rigorous exercise is the only way to drain these batteries. Keeping her inside to prevent this behavior from occurring just fills them up again and perpetuates the cycle.

Bumps in the road

Monique struggled taking Islay to playgroups. She had seen her bark, growl, and lunge at another dog in a puppy social, and feared that play groups were going to do more harm than good. Due to the apparent aggression, Islay stopped getting dog play. However, after a three week break when Islay got spayed and didn’t get outside, Monique reported that her reactivity was even worse. 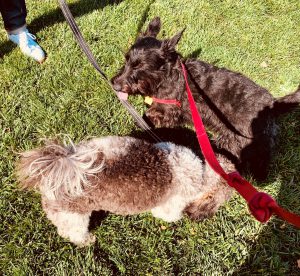 Islay’s learning curve was also difficult for Monique to cope with: there were good days and bad. One day Monique would report feeling great about how well Islay would perform, but the next day she would report feeling like the training was ‘a disaster’ because Islay lunged into the street at another dog. Torie was certain that the short, once-a-week dog park trips were not meeting Islay’s needs, as Torie said, “we need to make other dogs as boring as possible.” Torie suspected that if they could soften Islay’s frustration and deprivation, the ups and downs of training would be more manageable for Monique. To this end, Torie scheduled a dog park trip together with Monique so she could gain confidence attending the dog park on her own. Monique feared the possibility that “over-socialization” could worsen Islay’s reactivity.

The concept of ‘over-socialization’ is gaining popularity, and it does sound like it makes sense, but this one falls firmly in the fad category. It contradicts decades of scientific evidence in animal learning and socialization. It’s unfortunate that this myth makes things worse for pet parents—insufficient access to dogs worsens leash reactivity. The way to fix it is to address the deprivation along with training. All that happens when a dog has too many dog park visits is that dogs become boring—which is the whole point. Like eating your favorite meal for dinner every day, you will eventually get sick of it. And likely not feel an ounce of frustration if after months of this you were told you couldn’t have it anymore.

Or think of it this way: You take two kids, one who lives in Anaheim and goes to Disneyland every weekend, and another who lives across the country and has only been once. Park them both outside the Disneyland entrance and say, “You can’t go inside.” Who is going to throw the bigger tantrum? And you aren’t going to fix it by allowing the child to go inside, but for only one ride, because they are “too magnetized to Disneyland.”

That is to say, you really can’t have too much. As an added bonus, Islay will expend energy (a tired dog is a well-behaved dog.) There is an anti-play bias amongst dog sports trainers, but this is in violation of Freedom #4 of the 5 Freedoms of Animal Welfare: freedom to express normal behavior, with the company of the animal’s own kind.

The next bump in the road was Islay’s behavior around tennis balls. Monique and Torie had gone to the dog park together so Monique gained comfort and confidence, but in doing so, they witnessed a brand new behavior in Islay: guarding tennis balls from other dogs. Islay gave another puppy multiple warnings with a growl, bark, lunge, air snap, but still a squabble followed. Torie dreaded that this would further hurt the cause, despite the fact that non-injurious squabbles are typically not worrisome for dogs. So she did her best to normalize both resource guarding and species-typical arguments. As an easy solution, Torie recommended no fetch or balls for Islay around other dogs, and that Monique keep watch when at the dog park. If other dog owners were playing ball with their dogs, they should simply leave before Islay engages.

Monique has provided the following feedback for this case study:

I can say yesterday was one of the best walks ever. She made no reactivity to scooters, bikes, etc. Even scary loud noises, she walked right past and I popped a treat in her mouth after. No indiscriminate barking. She even walked right next to me. 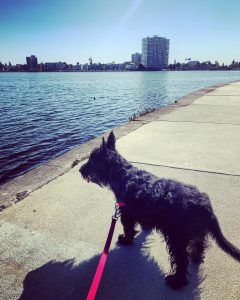 Just wanted to tell you what an amazing job you’ve done with the Don’t Touch cue. I can’t believe how much her reactivity has abated. When I took her out today we had an onslaught of dogs, all breeds and sizes. She now whines, but very little, maybe one bark and no lunging, I’d call it more “fast walking”?, and that’s really before I say the cue;  no reaction at all if I continue to feed her and cue her—plus she focuses on me until the dog passes!! It’s amazing. After our third dog or so, she passed a Shiba interacting with a Shih Tzu with no reaction at all.

I have seen a remarkable progress in her reactivity lately, I honestly start to tear up each time she has a good experience because I realise she’s truly learning, changing, it’s not just a one-time fluke. Today on our walk we passed a dog head on with zero reactivity, and another head on interaction where she got to sniff and say hello with an excited whimper and bark after the interaction. I’m so happy. Thank you.

We had a great day in Napa today. Took your advice and before any winery visits we found a nice dog park for small dogs to exert her energy. She even ventured to the fence to make friends with the big curious dogs.  Although no small dogs present, we played and got her running, and she was a pleasure the rest of the day. We even found a winery where no other dogs [were] present and she could walk off leash and made some human friends who loved a dog to play with while sipping on wine. I love [that] even off leash she doesn’t roam far and knows where she’s safe.

I have noticed a big change in her lately, too re: reactivity and general maturity. Today was her first time at the beach—she was great playing in the waves, and then being a quiet well-behaved dog after during picnic time. A couple even came up and commented on how well she was behaving. 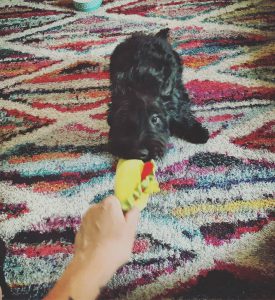 She saw a few dogs at the beach on leash, and while she was curious and leaned in to whimper, she wasn’t her usual barking, lunging self. By the third dog she was over it.

We stopped by a dog park on the way home. It was not separated, about a dozen big and small dogs came at her but she did great. I quickly figured out all the dogs and their owners knew each other and Islay was the odd one out. I felt proud of myself as an owner, I stayed close to her to give her confidence while she ventured to stay hello, or a place to come when she felt overwhelmed. I also had to be her advocate when the ball play started and I had to pick her up and take her out of the park before it got too much to handle.

At the time of writing, Torie is continuing to see Islay twice a week until she reaches adulthood, since Monique has been so pleased with her response to training. Monique tires Islay out before social outings, with wonderful results. Recently, Torie took Islay for a walk around Lake Merritt during which she behaved like a “normal”, non-reactive dog: they passed more than ten dogs, and although Islay whined and pulled a bit, she behaved well overall, and even had a nice polite greeting with a new dog.

Academy for Dog Trainers graduate Torie Silleto takes clients in Oakland, Berkeley, and Emeryville, CA. She can be reached by email or via her website.