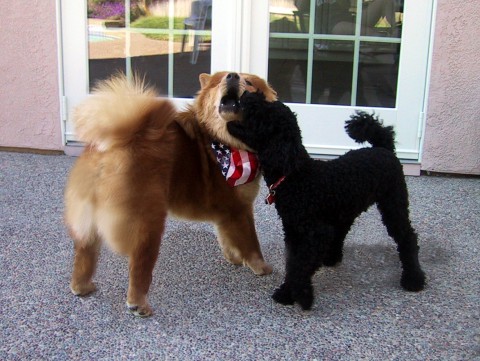 I am one of a small army of applied dog behavior people that fights against stuff every day.  Mainstays like the use of aversive stimuli (positive punishment and negative reinforcement) in dog training.  The absence of competence standards in dog training.  Breed-specific legislation.  Leadership leadership leadership.  And transient alarming trends such as don’t socialize puppies so much…socialization makes them outgoing, which is inconvenient.  And this one:  the idea that excitement is bad.  If dogs get amped up (buzzword: “aroused”), we should be alarmed.  And work to restore them to calm.  Which is good.

This last one is even coming from some pros.  My best guess is it’s emotion first, then rationalization, i.e. “dogs moving fast or getting excited upsets me, and I’m an expert, therefore it must be bad.”  The reasons then put forward seem to shake out into three buckets:

Let’s unpack them each in turn.

The bad things that can happen because of a dog’s presence are finite: a person is bitten, a person is otherwise injured (e.g. a large, fractious dog knocks a kid to the pavement and they hit their head), a dog is physically injured, a person or dog is traumatized and made fearful.  The error is the conflating of excitement with aggression or unruly behavior.  In other words, plenty of calm-looking dogs bite people, and plenty of dogs in mid-joyous abandon don’t.  And, assuming competence in the trainer (I know, a tenuous assumption still), dogs can be taught to not jump up, not pull on leash and not body-slam people, all while leaving any excited-type emotions in place.  In fact, those are the very contexts we most need manners and so are dedicated parameters in our training plans.  Behavior – jumping on people, biting people, attacking dogs – is the problem, not excitement.  So we use smart bombs (training and behavior modification) to target the problem behaviors, replace them with likable behaviors.  And we don’t shoot for nebulous terminal behaviors such as “relaxation.”

Some people feel that excitement during play is a harbinger of imminent aggression.  I can understand this.  Dogs are intense animals and most people Feel Better When They Are Calm.  Dogs play using their jaws.  And they slam, they wrestle, they mount, they run fast.  De-coupling intensity from aggression is an uphill battle, emotionally, but it’s worth the slog.  For play it goes like this.  Provided dogs are self-handicapping – attenuating the force of their play-bites and body-slams – and there are meta-signals and bi-lateral consent, all is well.

Consent doesn’t have to be guessed at (do a consent test).  And meta-signals such as play-bows, play-face and inefficient, bouncy movements are either present or they’re not.  Play can heat up and fisticuffs ensue when these items break down.  But focusing on “arousal” is eye off the ball.  It pulls resources from the actual ball, which is those three items: self-handicapping, meta-signals and consent.

Now, the hand-wringing is sometimes about the *stuff* of play, which is (supposed to be, and, behold, is), play versions of fight, flight, feeding and courtship.  This unpacks as play biting and wrestling, play chasing and fleeing, and play courting and mounting.  These may be performed laconically or with great gusto, and dogs have play styles (some are wrestle-heavy, some like to chase, some to be chased etc.).  People are not always comfortable with all items.  But obsessing about biting or mounting is eye off that ball again.

Most often, though, it isn’t the stuff, it’s the manner: it’s the dogs moving fast and being amped up that makes owners feel like it’s out of control.  But that’s not a good enough reason to stop dogs from playing.  There are welfare implications to denying species-normal play on insufficient grounds.  And micro-managing with eye off the ball usually shakes out as denying.  This is beautifully described in this post by Kristi Benson.

This school of thought, if you let an animal rehearse something, you’ll get more and more of it, is bested on the ideas playing field by a hydraulic model when it comes to play and excitement.  Activities such as eating, drinking, play and sex, wax and wane in normal animals depending on how recently they were engaged in.  The refractory period after a huge Thanksgiving meal.  The puppy out cold in the car after attending a puppy social.  How thirsty you are after not sipping all day and sweating a lot.  This waxing and waning is actually exploitable in applied behavior.  We use establishing and abolishing operations to make sure our motivators will work and to modulate the intensity of distractions in training plans.  Some of the very same trainers who likely do this worry about keeping a lid on excitement.  I can see channeling excitement but bottling it up to get less of it?  That’s how you build motivation: that’s how you get more of it.

There was consternation a few months ago about a video of an off-course agility dog.  He was having a blast racing around taking random obstacles, but there was a sub-set of viewers who read the dog’s glee as stress.  Then I saw a post recently where someone was warned against prompting zoomies lest they stress a particular dog.  Thankfully, no less than Marc Bekoff has now addressed this.  And, unbelievably, I just heard about an applied behavior practitioner who really ought to know better, admonishing against both training (sit, down, etc.) and enrichment (stuffed Kongs, snuffle mats etc.) because Stress.

While everybody applauds the impulse to reduce fear, anxiety and stress in dogs; excitement of the kids on Christmas morning variety, of the crazed laughing with friends variety, of the dogs racing around or unpacking a puzzle toy variety, is not bad.  It’s good.  It’s tortured logic to stuff intensity, because it makes a viewer uncomfortable, into the category “stress.”  It’s understandable that intensity in animals with pointy teeth pushes deep evolutionary buttons in us humans.  But if we are stressed, it doesn’t mean our dogs are stressed.